I have always had a healthy respect for working women, but it has deepened over the last month with me having to be very hands on with the building process.

There is a Christian saying, “My life is not my own” that I am experiencing in a different fashion. Today I have to call and cancel an oil change appointment, a chiropractic appointment and an appointment to have eyelash extensions applied for a family reunion we will be attending in a couple weeks. A total waste of money for vanity’s sake, but something I really wanted to do. I have to cancel these appointments because I have to be on site whenever an inspection is taking place during our building process, due to the homeowner build permits we pulled for plumbing, electrical and HVAC.

I have learned things I never imagined I would be learning, things that I hope to purge from the old memory banks as soon as I don’t need the information anymore. For instance: we failed our first inspection for rough in plumbing on Weds. The inspector was not happy that I wasn’t there, and we hadn’t vented properly. We were sent a copy of the code which read something to the effect of “when venting a horizontal run, the invert of the vent must be above the centerline of the pipe that is being vented blah, blah”. I did a complete revamp of the original, after a few hours of trying to figure out what the invert of a pipe was. It took a few hours, but I got it done and we ordered a re-inspect. Friday morning, bright and early, I was back on site, ready to start laying PEX (the flexible plumbing tuning for the in floor heat). The inspector arrived, I positioned myself seated lower than he on the stem wall and played the dumb homeowner. Which wasn’t hard to play, since I knew not much about plumbing when I started this. We spoke a bit, and he said I still didn’t have the inversion correct. I explained that I had a hard time finding an illustration of the code he sent. He then explained simply that it meant that I needed to twist the pipe so the vent is higher than the pipe it vents. 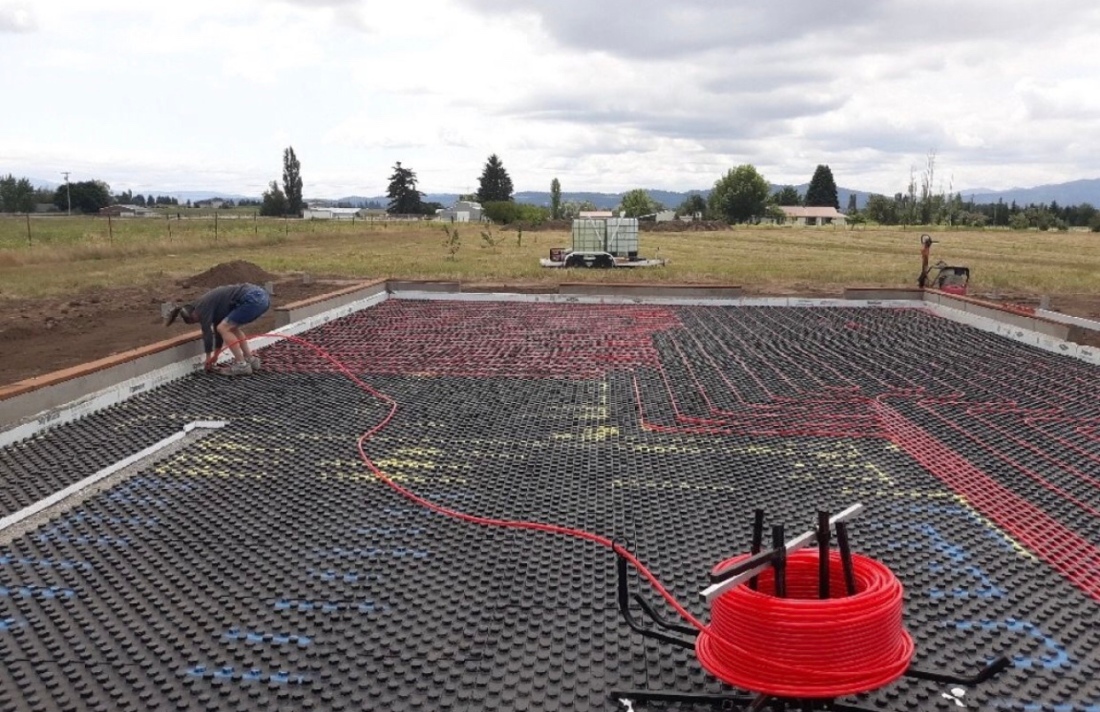 I was annoyed that the code is written in such a way that it is hard to understand unless you are a professional. I was annoyed at myself for not getting it right a second time. I was annoyed that I had to redo something this detail oriented, again. I am not a detail person, I am a big picture person. I buckled down and re-configured it again. The follow up inspection will cost $65, but we are still saving thousands doing it ourselves, and everything will be up to code, because we can’t pass inspections until they are. The reinspect will push us back a day on everything, because we can’t complete the in floor heat until the plumbing rough is filled in, and we can’t get an inspection on the heat, until we have it pressurized. AND we can’t pour the slab until all that is done.

I am hoping that I can carve out some time later in the week for the appointments I had to cancel, and I would love to spend a little time with my grands before we leave for our reunion. But, my life, my time, is not my own for now. It belongs to the building process, at least until we get the power and water in. Then, maybe I can have some downtime during the framing. Hopefully summer vacation isn’t over by then for the grands.

I am still not sure how all this building stuff is going to work when my daughter is here for a month long visit with our other grands.

Well, it’s time for me to make those cancellation calls. Thanks for listening to me “vent” about my “venting” mishaps. It actually helps to just share the story. May you find a safe place to tell your stories.

View all posts by grammikb